Decision trees are one of the oldest and most widely-used machine learning models, due to the fact that they work well with noisy or missing data, can easily be ensembled to form more robust predictors, and are incredibly fast at runtime. Moreover, you can directly visual your model's learned logic, which means that it's an incredibly popular model for domains where model interpretability is important.

Decision trees are pretty easy to grasp intuitively, let's look at an example. 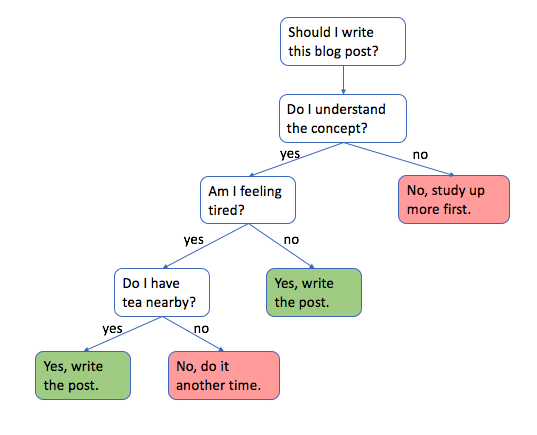 Note: decision trees are used by starting at the top and going down, level by level, according to the defined logic. This is known as recursive binary splitting.

For those wondering – yes, I'm sipping tea as I write this post late in the evening. Now let's dive in! 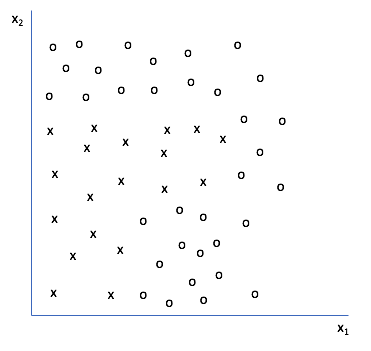 Any ideas on how we could make a decision tree to classify a new data point as "x" or "o"? Here's what I did. 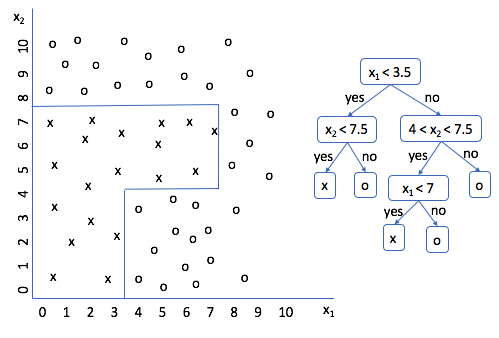 Run through a few scenarios and see if you agree. Look good? Cool. So now we have a decision tree for this data set; the only problem is that I created the splitting logic. It'd be much better if we could get a machine to do this for us. But how?

If you analyze what we're doing from an abstract perspective, we're taking a subset of the data, and deciding the best manner to split the subset further. Our initial subset was the entire data set, and we split it according to the rule $x_1 < 3.5$. Then, for each subset, we performed additional splitting until we were able to correctly classify every data point.

Entropy may be calculated as a summation over all classes where $p_i$ is the fraction of data points within class $i$. This essentially represents the impurity, or noisiness, of a given subset of data. A homogenous dataset will have zero entropy, while a perfectly random dataset will yield a maximum entropy of 1. With this knowledge, we may simply equate the information gain as a reduction in noise.

Here, we're comparing the noisiness of the data before splitting the data (parent) and after the split (children). If the entropy decreases due to a split in the dataset, it will yield an information gain. A decision tree classifier will make a split according to the feature which yields the highest information gain. This is a recursive process; stopping criterion for this process include continuing to split the data until (1) the tree is capable of correctly classifying every data point, (2) the information gain from further splitting drops below a given threshold, (3) a node has fewer samples than some specified threshold, (4) the tree has reached a maximum depth, or (5) another parameter similarly calls for the end of splitting. To learn more about this process, read about the ID3 algorithm.

Often you may find that you've overfitted your model to the data, which is often detrimental to the model's performance when you introduce new data. To prevent this overfitting, one thing you could do is define some parameter which ends the recursive splitting process. As I mentioned earlier, this may be a parameter such as maximum tree depth or minimum number of samples required in a split. Controlling these model hyperparameters is the easiest way to counteract overfitting.

Evaluating a split using information gain can pose a problem at times; specifically, it has a tendency to favor features which have a high number of possible values. Say I have a data set that determines whether or not I choose to go sailing for the month of June based on features such as temperature, wind speed, cloudiness, and day of the month. If I made a decision tree with 30 child nodes (Day 1, Day 2, ..., Day 30) I could easily build a tree which accurately partitions my data. However, this is a useless feature to split based on because the second I enter the month of July (outside of my training data set), my decision tree has no idea whether or not I'm likely to go sailing. One way to circumvent this is to assign a cost function (in this case, the gain ratio) to prevent our algorithm from choosing attributes which provide a large number of subsets.

Without any parameter tuning we see an accuracy of 94.9%, not too bad! The decision tree classifier in sklearn has an exhaustive set of parameters which allow for maximum control over your classifier. These parameters include: criterion for evaluating a split (this blog post talked about using entropy to calculate information gain, however, you can also use something known as Gini impurity), maximum tree depth, minimum number of samples required at a leaf node, and many more.

Regression models, in the general sense, are able to take variable inputs and predict an output from a continuous range. However, decision tree regressions are not capable of producing continuous output. Rather, these models are trained on a set of examples with outputs that lie in a continuous range. These training examples are partitioned in the decision tree and new examples that end in a given node will take on the mean of the training example values that reside in the same node.

Alright, but how do we get there? As I mentioned before, the general process is very similar to a decision tree classifier with a few small changes.

We'll still build our tree recursively, making splits on the data as we go, but we need a new method for determining the optimal split. For classification, we used information entropy (you can also use the Gini index or Chi-square method) to figure out which split provided the biggest gain in information about the new example's class. For regression, we're not trying to predict a class, but rather we're expected the generate an output given the input criterion. Thus, we'll need a new method for determining optimal fit.

One way to do this is to measure whether or not a split will result in a reduction of variance within the data. If a split is useful, its combined weighted variance of the child nodes will be less than the original variance of the parent node. We can continue to make recursive splits on our dataset until we've effectively reduced the overall variance below a certain threshold, or upon reaching another stopping parameter (such as reaching a defined maximum depth). Notice how the mean squared error decreases as you step through the decision tree.

Here's the code I used to generate the graphic above.

The goal of logistic regression, as with any classifier, is to figure out some way to split the data to allow for an accurate prediction of a given observation's class using the information present in the features. (For instance, if we were examining the

Before you read this post, go ahead and check out my post on decision trees for classification. This post will be building on top of that, as you'll see that decision tree regressors are very similar to decision tree classifiers. Regression models, in the