Decision trees are desirable in that they scale well to larger datasets, they are robust against irrelevant features, and it is very easy to visualize the rationalization between a decision tree's predictions. Further, decision trees have low bias as there is minimal implicitly defined structure in the model (as opposed to linear regression, for example, which makes the assumption of linear relationships). Unfortunately, decision trees are prone to high variance and will overfit noisy data.

Random forests inherit the benefits of a decision tree model whilst improving upon the performance by reducing the variance. In building a random forest, we train a collection of decision trees on random subsets of the training data. Further, on each sampling from the population, we also sample a subset of features from the overall feature space. This adds randomness (with the intent to reduce variance in the end model) to the splitting process by limiting the features available for to split on for each individual base model.

As mentioned previously, one of the downsides of decision trees is the fact that the model behavior varies significantly dependent on which data was used for training. This can make it difficult to train a single model which generalizes well. This is visualized below in an example where the training data is a noisy estimate of the true data generating function, $f(x)$. 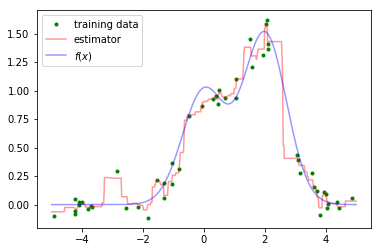 However, we can overcome this by training an ensemble of models, each trained on different subsets of our data. We'll observe this by training a collection of 50 trees, each trained on different random samples of $f(x)$ with a small amount of injected noise. Although each tree overfits to the sample on which it was trained, when you combine the predictions across trees you can build a much better estimate of the true data generating function.

This technique of randomly sampling our data with replacement, training a base estimator, and then aggregating the individual predictions is known as bootstrap aggregating, or bagging for short.

Empirical good default values are max_features=n_features for regression problems, and max_features=sqrt(n_features) for classification tasks (where n_features is the number of features in the data). – scikit-learn User Guide

Out of bag score

We do this by passing the training observations through only the subset of trees that never saw that data during training. This allows us to form an out of bag estimate of our model's performance.

Many machine learning techniques involve building a model that is capable of representing the data and then finding the optimal parameters for the model to minimize error. K-nearest neighbors, however, is an example of instance-based learning where we instead simply store the training data