In my introductory post on autoencoders, I discussed various models (undercomplete, sparse, denoising, contractive) which take data as input and discover some latent state representation of that data. More specifically, our input data is converted into an encoding vector where each dimension represents some learned attribute about the data. The most important detail to grasp here is that our encoder network is outputting a single value for each encoding dimension. The decoder network then subsequently takes these values and attempts to recreate the original input.

A variational autoencoder (VAE) provides a probabilistic manner for describing an observation in latent space. Thus, rather than building an encoder which outputs a single value to describe each latent state attribute, we'll formulate our encoder to describe a probability distribution for each latent attribute.

To provide an example, let's suppose we've trained an autoencoder model on a large dataset of faces with a encoding dimension of 6. An ideal autoencoder will learn descriptive attributes of faces such as skin color, whether or not the person is wearing glasses, etc. in an attempt to describe an observation in some compressed representation. 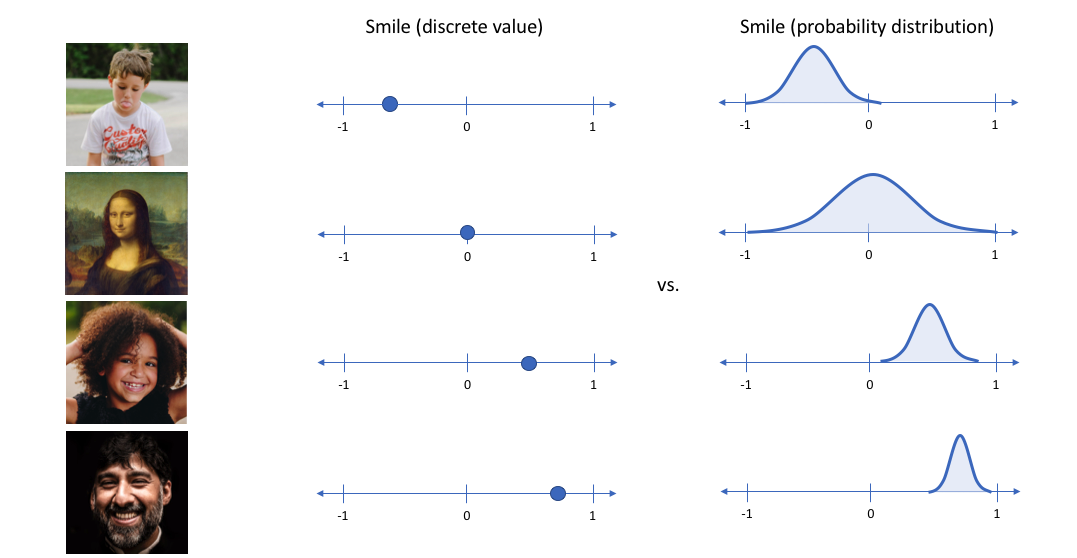 With this approach, we'll now represent each latent attribute for a given input as a probability distribution. When decoding from the latent state, we'll randomly sample from each latent state distribution to generate a vector as input for our decoder model.

By constructing our encoder model to output a range of possible values (a statistical distribution) from which we'll randomly sample to feed into our decoder model, we're essentially enforcing a continuous, smooth latent space representation. For any sampling of the latent distributions, we're expecting our decoder model to be able to accurately reconstruct the input. Thus, values which are nearby to one another in latent space should correspond with very similar reconstructions.

Suppose that there exists some hidden variable $z$ which generates an observation $x$. 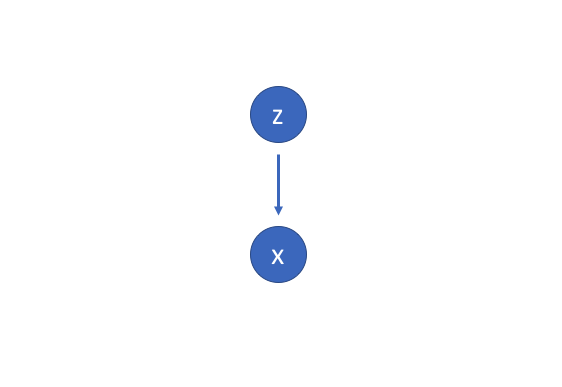 This usually turns out to be an intractable distribution. However, we can apply varitational inference to estimate this value.

Dr. Ali Ghodsi goes through a full derivation here, but the result gives us that we can minimize the above expression by maximizing the following:

The first term represents the reconstruction likelihood and the second term ensures that our learned distribution $q$ is similar to the true prior distribution $p$.

Our loss function for this network will consist of two terms, one which penalizes reconstruction error (which can be thought of maximizing the reconstruction likelihood as discussed earlier) and a second term which encourages our learned distribution ${q\left( {z|x} \right)}$ to be similar to the true prior distribution ${p\left( z \right)}$, which we'll assume follows a unit Gaussian distribution, for each dimension $j$ of the latent space.

In the previous section, I established the statistical motivation for a variational autoencoder structure. In this section, I'll provide the practical implementation details for building such a model yourself.

Rather than directly outputting values for the latent state as we would in a standard autoencoder, the encoder model of a VAE will output parameters describing a distribution for each dimension in the latent space. Since we're assuming that our prior follows a normal distribution, we'll output two vectors describing the mean and variance of the latent state distributions. If we were to build a true multivariate Gaussian model, we'd need to define a covariance matrix describing how each of the dimensions are correlated. However, we'll make a simplifying assumption that our covariance matrix only has nonzero values on the diagonal, allowing us to describe this information in a simple vector.

Our decoder model will then generate a latent vector by sampling from these defined distributions and proceed to develop a reconstruction of the original input.

However, this sampling process requires some extra attention. When training the model, we need to be able to calculate the relationship of each parameter in the network with respect to the final output loss using a technique known as backpropagation. However, we simply cannot do this for a random sampling process. Fortunately, we can leverage a clever idea known as the "reparameterization trick" which suggests that we randomly sample $\varepsilon$ from a unit Gaussian, and then shift the randomly sampled $\varepsilon$ by the latent distribution's mean $\mu$ and scale it by the latent distribution's variance $\sigma$.

With this reparameterization, we can now optimize the parameters of the distribution while still maintaining the ability to randomly sample from that distribution.

Note: In order to deal with the fact that the network may learn negative values for $\sigma$, we'll typically have the network learn $\log \sigma$ and exponentiate this value to get the latent distribution's variance.

To understand the implications of a variational autoencoder model and how it differs from standard autoencoder architectures, it's useful to examine the latent space. This blog post introduces a great discussion on the topic, which I'll summarize in this section.

The main benefit of a variational autoencoder is that we're capable of learning smooth latent state representations of the input data. For standard autoencoders, we simply need to learn an encoding which allows us to reproduce the input. As you can see in the left-most figure, focusing only on reconstruction loss does allow us to separate out the classes (in this case, MNIST digits) which should allow our decoder model the ability to reproduce the original handwritten digit, but there's an uneven distribution of data within the latent space. In other words, there are areas in latent space which don't represent any of our observed data.

On the flip side, if we only focus only on ensuring that the latent distribution is similar to the prior distribution (through our KL divergence loss term), we end up describing every observation using the same unit Gaussian, which we subsequently sample from to describe the latent dimensions visualized. This effectively treats every observation as having the same characteristics; in other words, we've failed to describe the original data.

However, when the two terms are optimized simultaneously, we're encouraged to describe the latent state for an observation with distributions close to the prior but deviating when necessary to describe salient features of the input.

When I'm constructing a variational autoencoder, I like to inspect the latent dimensions for a few samples from the data to see the characteristics of the distribution. I encourage you to do the same.

If we observe that the latent distributions appear to be very tight, we may decide to give higher weight to the KL divergence term with a parameter $\beta>1$, encouraging the network to learn broader distributions. This simple insight has led to the growth of a new class of models - disentangled variational autoencoders. As it turns out, by placing a larger emphasis on the KL divergence term we're also implicitly enforcing that the learned latent dimensions are uncorrelated (through our simplifying assumption of a diagonal covariance matrix).

Variational autoencoders as a generative model

By sampling from the latent space, we can use the decoder network to form a generative model capable of creating new data similar to what was observed during training. Specifically, we'll sample from the prior distribution ${p\left( z \right)}$ which we assumed follows a unit Gaussian distribution.

The figure below visualizes the data generated by the decoder network of a variational autoencoder trained on the MNIST handwritten digits dataset. Here, we've sampled a grid of values from a two-dimensional Gaussian and displayed the output of our decoder network. 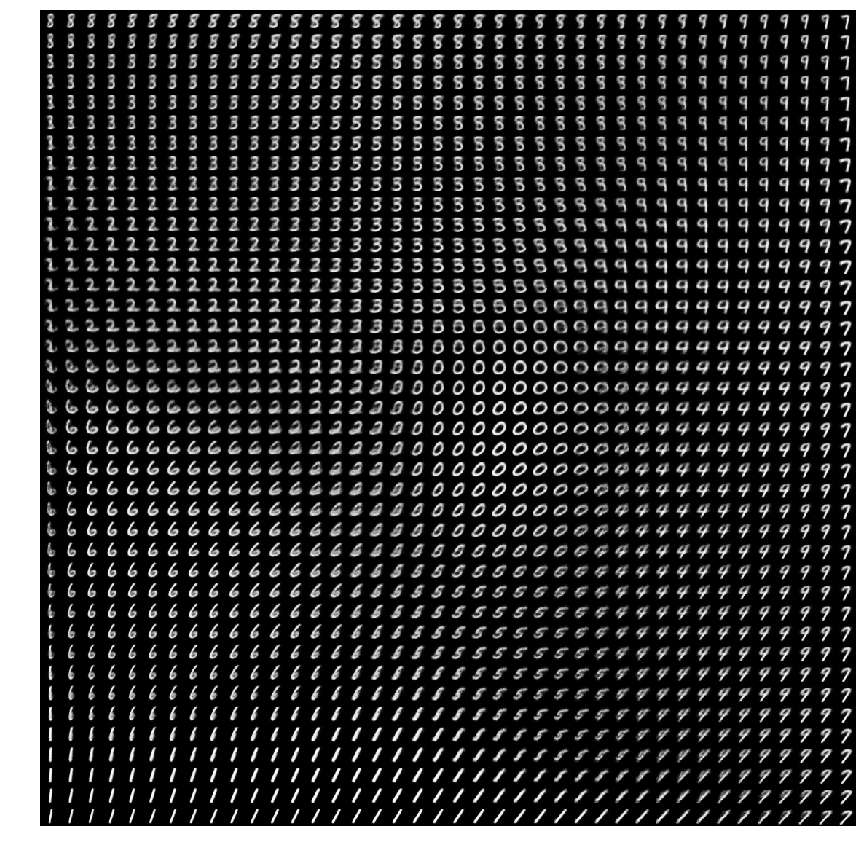 As you can see, the distinct digits each exist in different regions of the latent space and smoothly transform from one digit to another. This smooth transformation can be quite useful when you'd like to interpolate between two observations, such as this recent example where Google built a model for interpolating between two music samples.

Autoencoders are an unsupervised learning technique in which we leverage neural networks for the task of representation learning. Specifically, we'll design a neural network architecture such that we impose a bottleneck in the network which forces a compressed knowledge representation of the original input.