In the previous post, I discussed two different learning methods for reinforcement learning, Monte Carlo learning and temporal difference learning. I then provided a unifying view by considering $n$-step TD learning and establishing hybrid learning method, $TD\left( \lambda \right)$. These methods are mainly focused on how to approximate a value function from experience. I introduced a new value function, $Q\left( {s,a} \right)$, that looks at the value of state-action pairs in order to achieve model-free learning. For all approaches, learning takes place by policy iteration, as shown below. 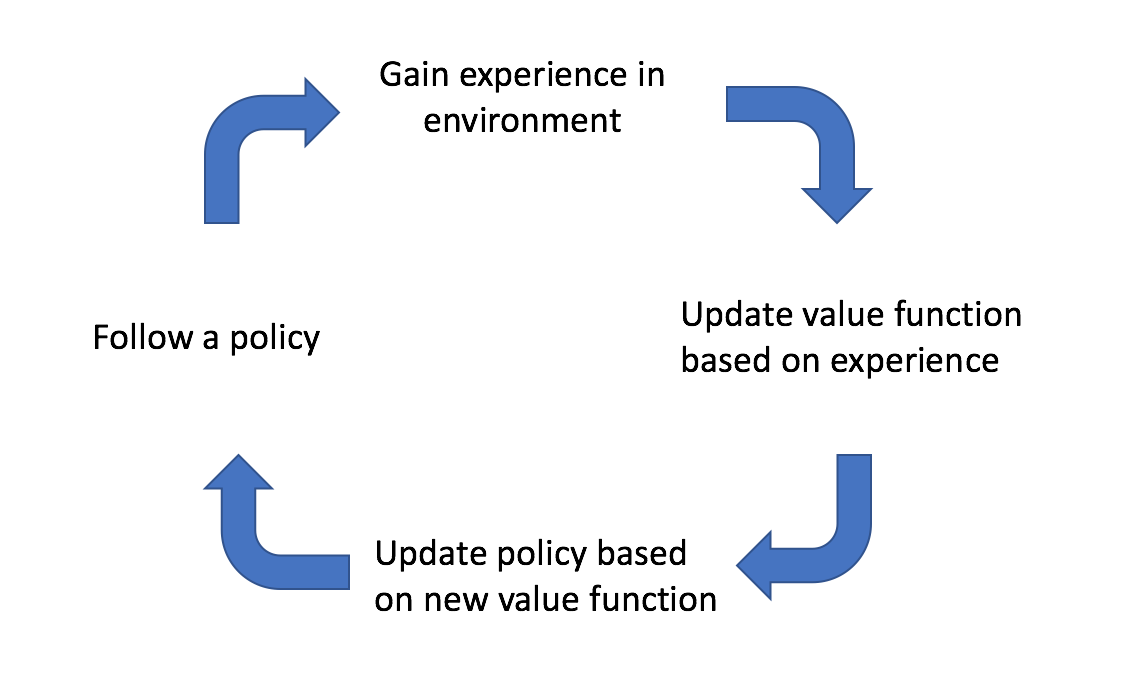 In this post, I'll discuss specific implementations of the Monte Carlo and TD approach to learning. However, I first must introduce the concept of on-policy and off-policy learning. A method is considered on-policy if the agent follows the same policy which it is iteratively improving. However, there are cases where it would be more useful to have the agent follow a behavior policy while learning a target policy. Such methods, where the agent doesn't follow the same policy that it is learning, are considered off-policy.

The Monte Carlo approach approximates the value of a state-action pair by calculating the mean return from a collection of episodes.

GLIE Monte-Carlo is an on-policy learning method that learns from complete episodes. For each state-action pair, we keep track of how many times the pair has been visited with a simple counter function.

For each episode, we can update our estimated value function using an incremental mean.

We'll adopt an $\epsilon$-greedy policy with $\epsilon=\frac{1}{k}$ where $k$ represents the number of episodes our agent has learned from.

The temporal difference approach approximates the value of a state-action pair by comparing estimates at two points in time (thus the name, temporal difference). The intuition behind this method is that we can formulate a better estimate for the value of a state-action pair after having observed some of the reward that our agent accumulates after having visited a state and performing a given action.

Sarsa is an on-policy $TD\left(0 \right)$ learning method. The name refers to the State-Action-Reward-State-Action sequence that we use to update our action value function, $Q\left( {s,a} \right).$ 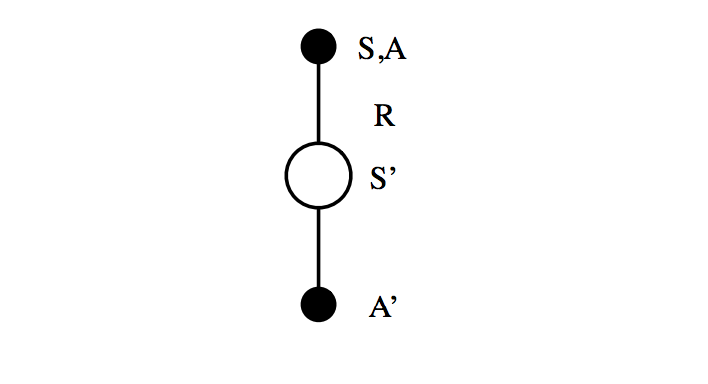 The value function update equation may be written as

where we include one step of experience combined with a discounted estimate for future returns as our TD target.

Q-learning is an off-policy $TD\left(0 \right)$ learning method where the agent's next action is chosen according to a behavior policy but we evaluate state-action pairs according to a target policy. This has the effect of allowing our agent to explore while maintaining the highest possible accuracy when comparing our expected state-action value to a target. 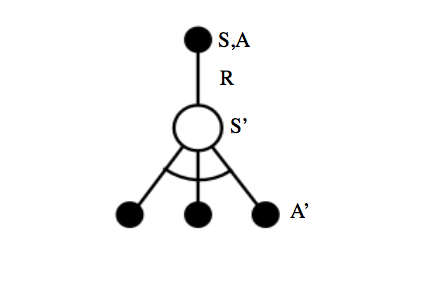 So far, we've discussed methods which seek a more informed valuation of a state-action pair by two main approaches, a one-step lookahead combined with a guess (the temporal difference approach) and a full sequence lookahead (the Monte Carlo approach). Let us now consider the spectrum of algorithms that lie between these two methods by expanding our Sarsa implementation to include $n$-step returns.

The general Sarsa algorithm considers the case of $n=1$, where our more informed valuation of a state-action pair $q_t^{\left( 1 \right)}$ at time $t$ may be written as:

At the other end of the spectrum, the Monte Carlo approach, which considers a full sequence of observed rewards until the agent reaches a terminal timestep $T$, may be written as:

However, we could develop $q_t^{\left( n \right)}$ to generally represent a target value which incorporates $n$ steps of experience combined with a guess for the value of the future trajectory from that point onward. 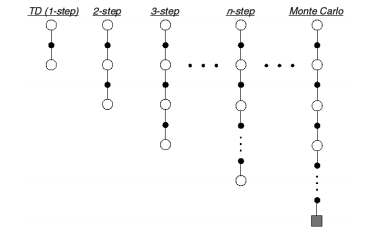 The $n$-step Sarsa implementation is an on-policy method that exists somewhere on the spectrum between a temporal difference and Monte Carlo approach.

The value function update equation may be written as

The forward-view Sarsa$\left(\lambda\right)$ simply adjusts our estimated value function towards the $q_t^\lambda$ target.

However, we need to develop a backward-view algorithm in order to enable our agent to learn online during each episode. Otherwise, we'd need to wait until the agent reaches a terminal state to do the forward-view algorithm described above. To do this, we'll need to replace our $n$-step aggregation approach with eligibility traces, a way of keeping track of which previously visited states are likely to be responsible for the reward accumulated (covered in more detail in the previous post).

Our value function is updated in proportion to both the TD error and the eligilibilty trace.

This method is an on-policy approach, meaning that next actions are selected according to the learned policy.

Previously, I discussed how we can use the Markov Decision Process [https://www.jeremyjordan.me/markov-decision-process] for planning in stochastic environments. For the process of planning, we already have an understanding of our environment via access to information given by the transfer function and