Sometimes when we're performing clustering on a dataset, there exist points which don't belong strongly to any given cluster. If we were to use something like k-means clustering, we're forced to make a decision as to which group an observation belongs to. However, it would be useful to be able to quantify the likelihood of a given observation belonging to any of the clusters present in our dataset. We would then be able to see some observations are a close tie between belonging to two clusters.

For example, examine the scatterplot showing two clusters (in blue) and some fringe observations (in red) that may belong to either of the two clusters. Ideally, we'd like to be as true to the data as possible when assigning observations to clusters; allowing partial assignment to multiple clusters allows us to more accurately describe the data. 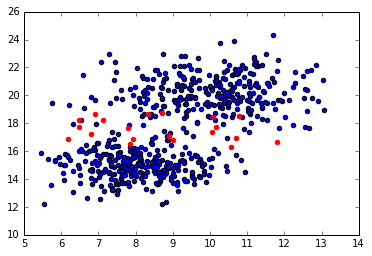 Essentially, the process goes as follows:

Suppose I have data for a set of observations with one feature, $x _1$, that come from two distinct classes.

Unfortunately, we usually perform clustering because we don't have a labeled dataset and thus don't know which class any of the observations belong to- that's what we're hoping to learn!

Since we don't know which class each observation belongs to, we don't have an easy way to build multiple Gaussian models to partition the data. We can no longer simply calculate the mean and variance of observations belonging to each class.

Let's start with a random guess of our Gaussian models and then iteratively optimize the attributes, in a similar fashion as we did for k-mean clustering, to find the optimal Gaussian model to express the data.

After using $z_i$ to calculate the weighted parameters (mean and variance) for each cluster, we update the Gaussian models. You'll see that the leftmost data (circled below) will pull both models in it's direction, but it will have a larger effect on the left Gaussian since the observations will have a higher weight for the model that it's closest to.

We'll continue this cycle of recalculating $z_i$ and then using it to update the Gaussians until we "converge" on optimal clusters.

The example above visualizes a univariate Gaussian example, we can extend this logic, however, to accomodate multivariate datasets. If you're not familiar with multivariate Gaussian distributions, I recommend you spend a little time reading about them or watching a lecture. I've found this video and this video to be useful. There are subtle difference between univariate and multivariate models, namely that we now have a vector of means and a covariance matrix rather than single values for mean and variance.

Now that we understand what's going on, let's dive into the specifics of the algorithm.

Foremost, we must select how many segments we'd like to partition our data into. To do this, we can use the Bayesian information criterion (BIC). This criterion is commonly used for model selection with preference for the model possessing the lowest BIC. The sklearn documentation has a good example on this process.

Note: You can calculate the BIC of a given GaussianMixture in sklearn using the bic() method.

After selecting $k$ segments to partition the data into, we initialize $k$ random Gaussian models.

After initializing $k$ random Gaussian models we can calculate our expectation of $z _i$, a vector of probabilities that $x _i$ belongs to the $j ^{th}$ cluster for $j=1$ to $j=k.$ As mentioned earlier, we don't know the true probabilitistic cluster assignments for $z$, so we'll start with a guess and iteratively refine it.

We'll then recalculate our Gaussian models leveraging the weights we found in the expectation step. The expectation, ${E\left[ {{z _{i,j}}} \right]}$, represents the likelihood that the $i ^{th}$ observation belongs to cluster $j$.

With k-means clustering, we iteratively recalculated means and reassigned observations until convergence and observations stopped moving between clusters. However, because we're now dealing with continuous probabilities, and because we never give a hard cluster assignment, we can't rely on this convergence. Instead, we'll set a stopping criterion to end the iterative cycle once the observation probabilities stop changing by above some threshold.

Feature selection can be an important part of the machine learning process as it has the ability to greatly improve the performance of our models. While it might seem intuitive to provide your model with all of the information you have with the thinking

This post aims to discuss what a neural network is and how we represent it in a machine learning model. Subsequent posts will cover more advanced topics such as training and optimizing a model, but I've found it's helpful to first have a solid