This post aims to discuss what a neural network is and how we represent it in a machine learning model. Subsequent posts will cover more advanced topics such as training and optimizing a model, but I've found it's helpful to first have a solid understanding of what it is we're actually building and a comfort with respect to the matrix representation we'll use.

Neural networks are a biologically-inspired algorithm that attempt to mimic the functions of neurons in the brain. Each neuron acts as a computational unit, accepting input from the dendrites and outputting signal through the axon terminals. Actions are triggered when a specific combination of neurons are activated. 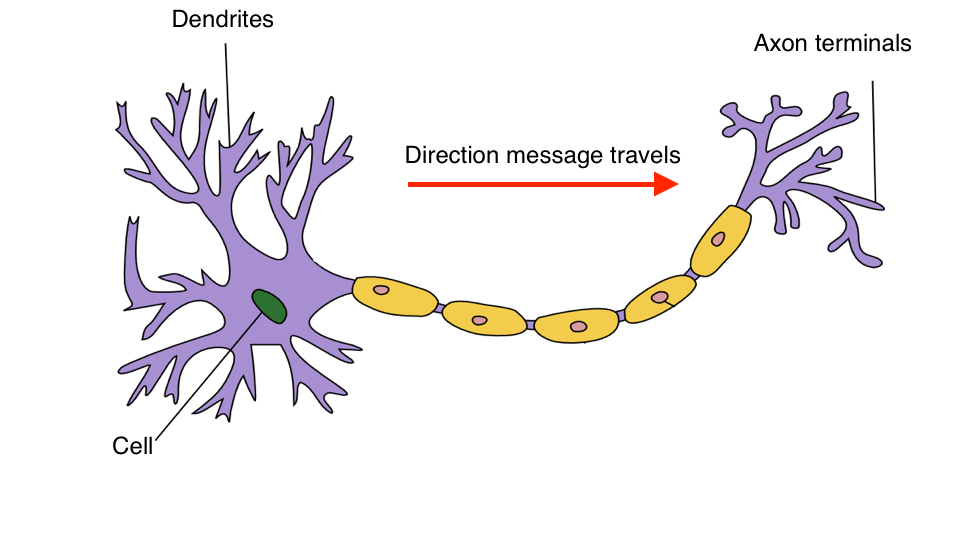 In essence, the cell acts a function in which we provide input (via the dendrites) and the cell churns out an output (via the axon terminals). The whole idea behind neural networks is finding a way to 1) represent this function and 2) connect neurons together in a useful way.

I found the following two graphics in a lecture on neural networks by Andrea Palazzi that quite nicely compared biological neurons with our computational model of neurons. 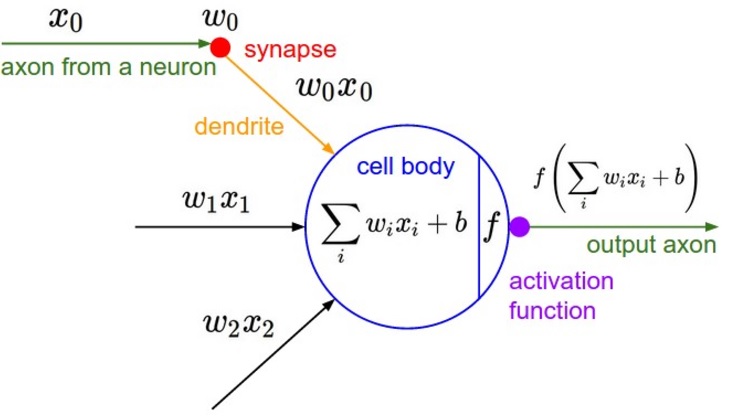 To learn more about how neurons are connected and operate together in the brain, check out this video.

A computational model of a neuron

Have you read my post on logistic regression yet? If not, go do that now; I'll wait.

In logistic regression, we composed a linear model ${z\left( x \right)}$ with the logistic function ${g\left( z \right)}$ to form our predictor. This linear model was a combination of feature inputs $x_i$ and weights $w_i$.

Let's try to visualize that. 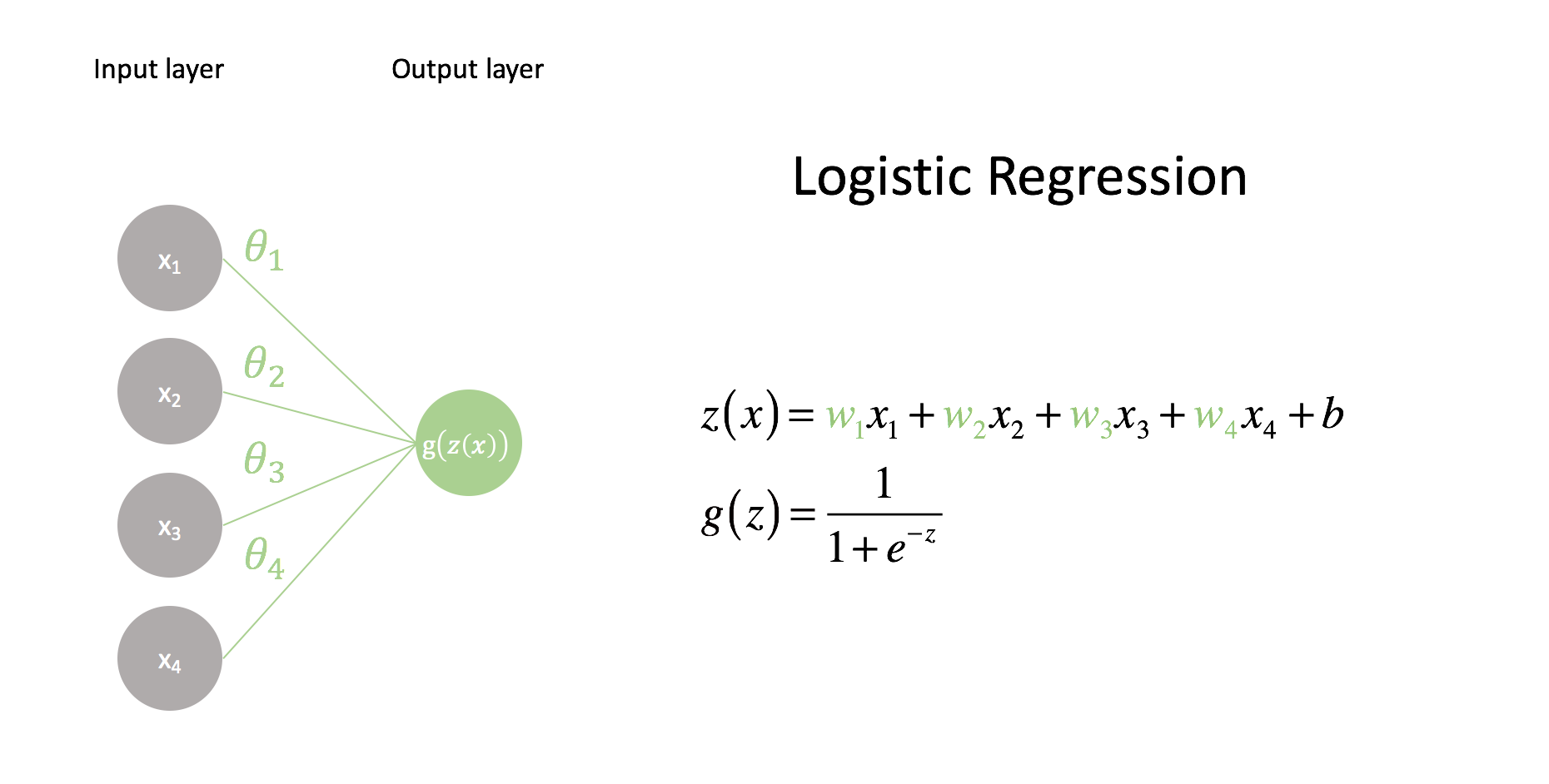 The first layer contains a node for each value in our input feature vector. These values are scaled by their corresponding weight, $w_i$, and added together along with a bias term, $b$. The bias term allows us to build linear models that aren't fixed at the origin. The following image provides an example of why this is important. Notice how we can provide a much better decision boundary for logistic regression when our linear model isn't fixed at the origin. 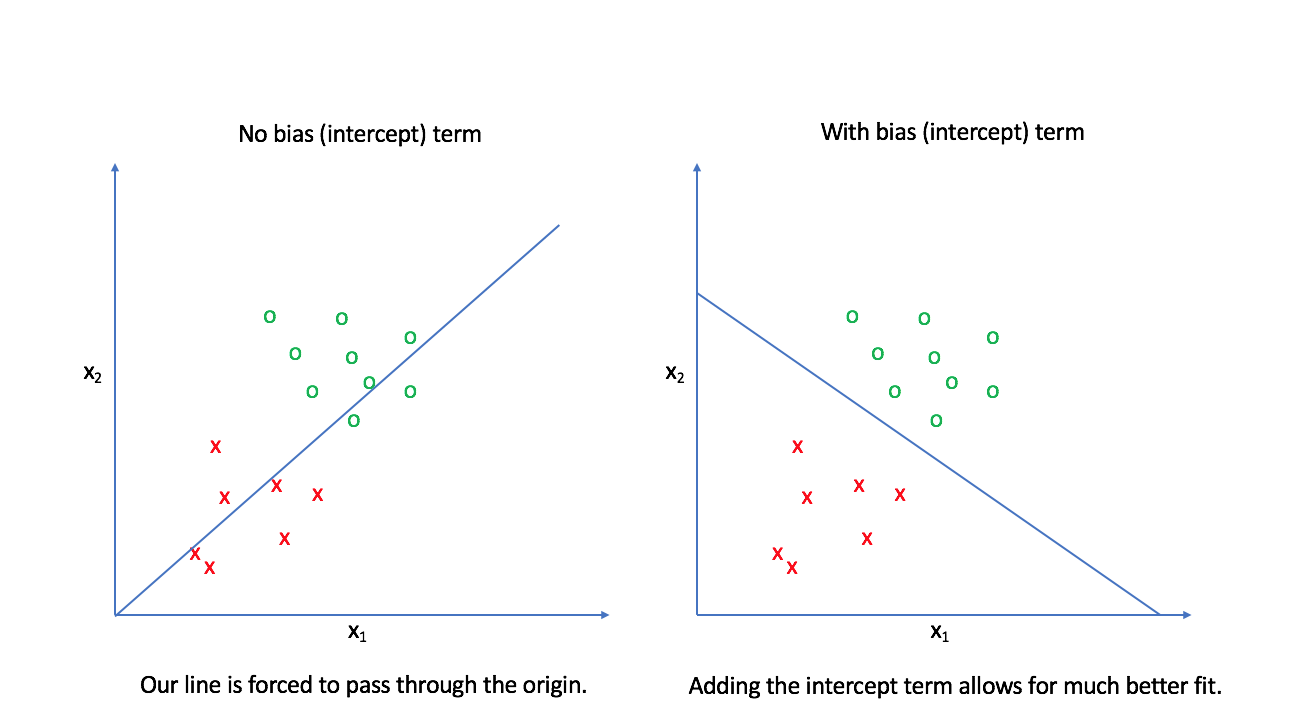 The input nodes in our network visualization are all connected to a single output node, which consists of a linear combination of all of the inputs. Each connection between nodes contains a parameter, $w$, which is what we'll tune to form an optimal model (tuning these parameters will be covered in a later post). The final output is functional composition, $g\left( {z\left( x \right)} \right)$. When we pass the linear combination of inputs through the logistic (also known as sigmoid) function, the neural network community refers to this as activation. Namely, the sigmoid is an activation function which controls whether or not the end node "neuron" will fire. As you'll see later, there's a whole family of possible activation functions that we can use.

Comparison to a perceptron unit 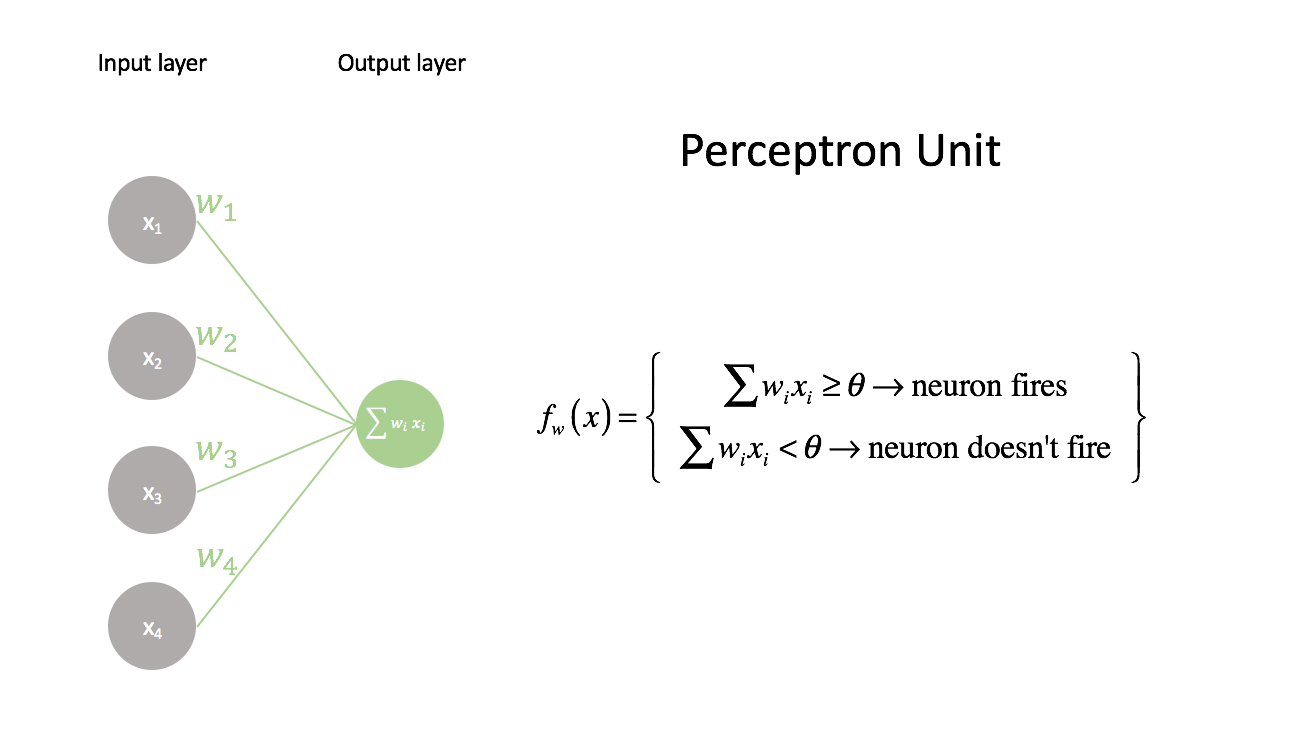 Building a network of neurons

The previous model is only capable of binary classification; however, recall that we can perform multi-class classification by building a collection of logistic regression models. Let's extend our "network" to represent this. 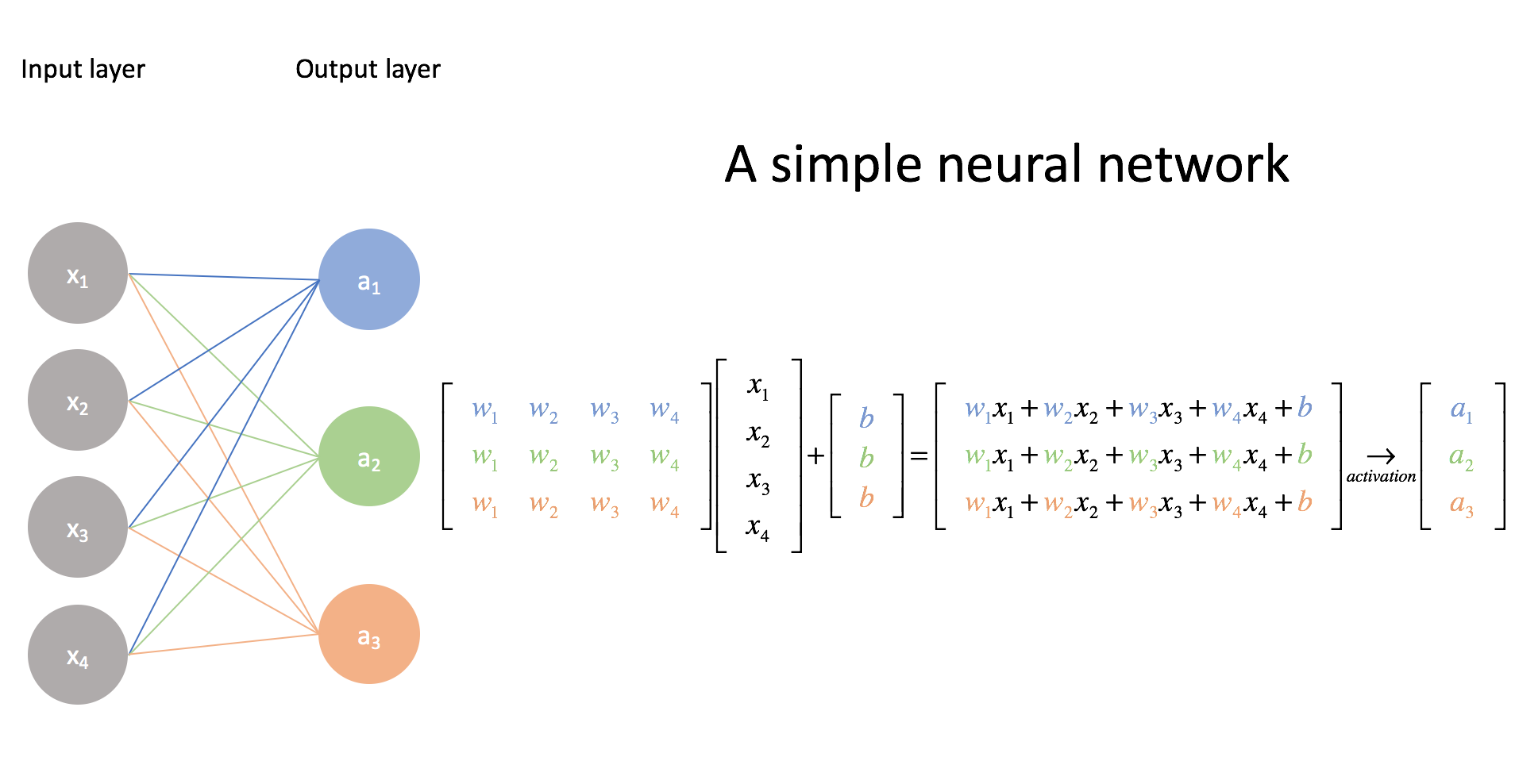 Note: While I didn't explicitly show the activation function here, we still use it on each linear combination of inputs. I mainly just wanted to show the connection between the visual representation and matrix form.

Here, we've built three distinct logistic regression models, each with their own set of parameters. Take a moment to make sure you understand this matrix representation. (This is why matrix multiplication is listed as a prerequisite.) It's rather convenient that we can leverage matrix operations as it allows us to perform these calculations quickly and efficiently.

The above example displays the case for multi-class classification on a single example, but we can also extend our input matrix to classify a collection of examples. This is not simply useful, but necessary for our optimization algorithm (in a later post) to learn from all of the examples in an efficient manner when finding the best parameters (more commonly referred to as weights in the neural network community). 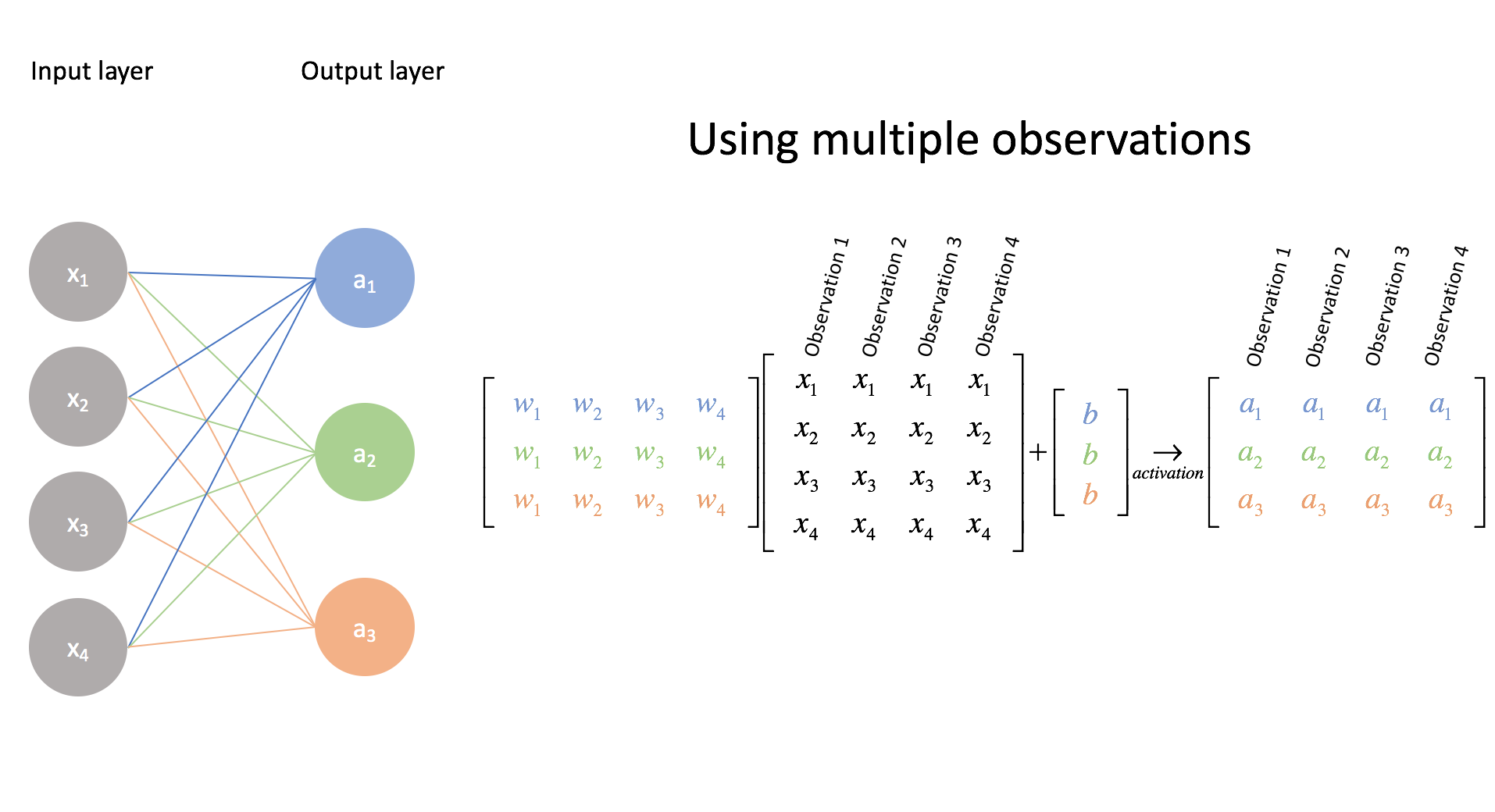 Again, go through the matrix multiplications to convince yourself of this.

Moving forward, we'll describe our weights more succinctly as a vector $w_i$ where the subscript $i$ now represents the neuron which uses that set of weights. 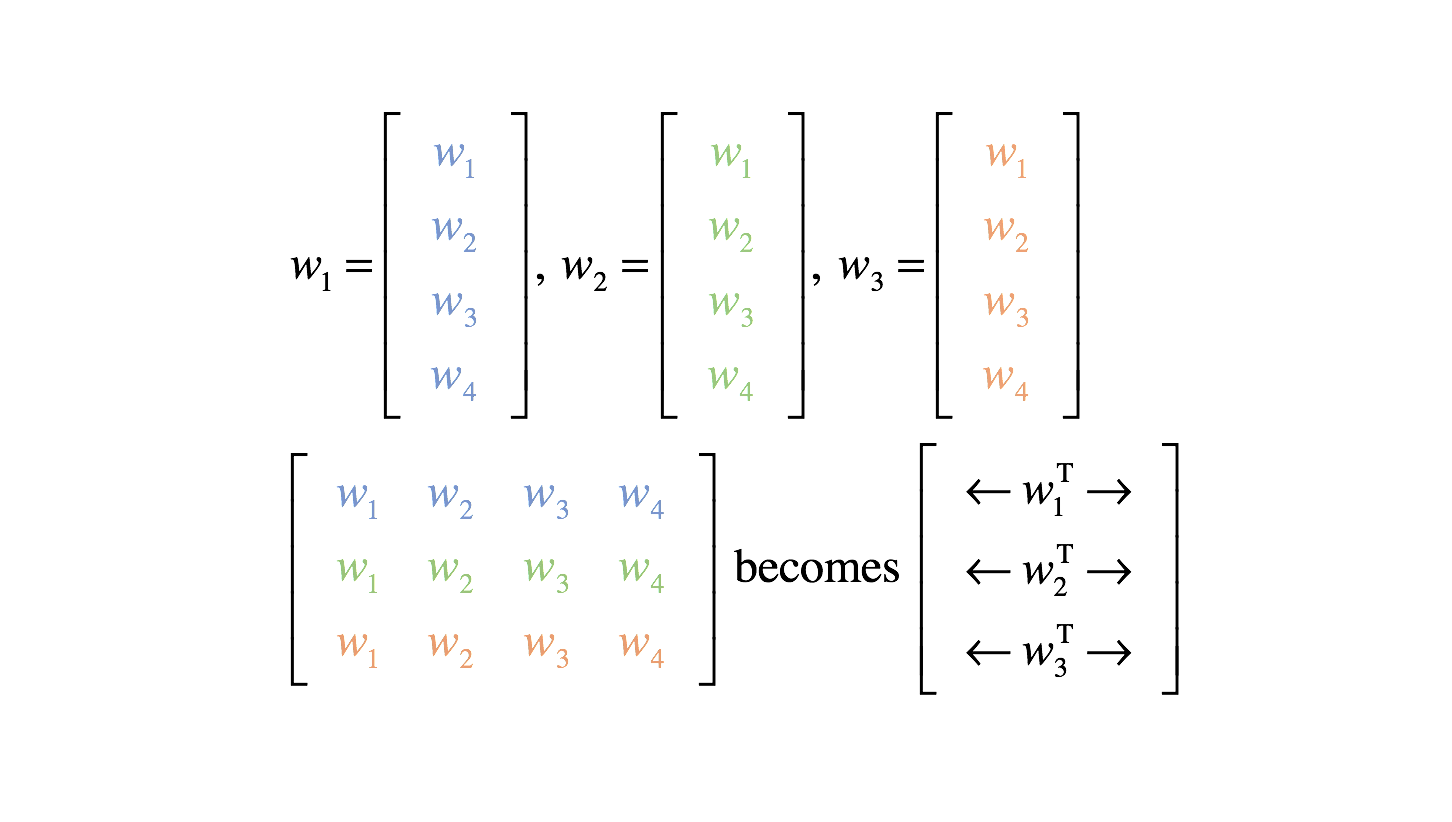 Thus, we can define a weight matrix, $W$, for a layer. Our bias may similarly be described as a vector $b$.

Up until now, we've been dealing solely with one-layer networks; we feed information into the input layer and observe the results in the output layer. (The input layer often isn't counted as a layer in the neural network.) 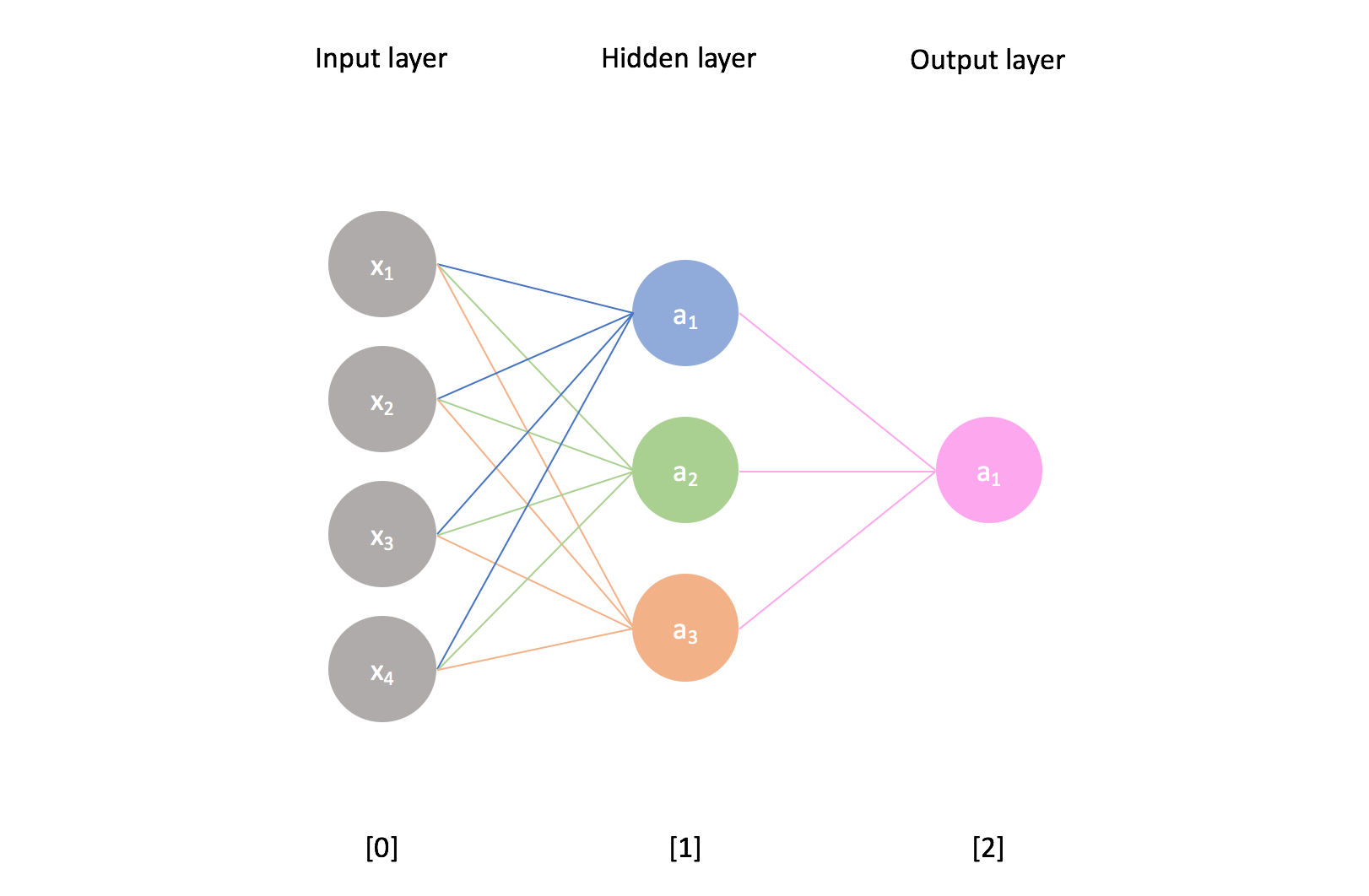 For example, $a_2^{\left[ 1 \right]}$ represents the activation of the second neuron in the first hidden layer. We can calculate this value by first combining the proper weights and bias with the previous layer's values

and then passing this through our activation function, $g\left( z \right)$. Notice how each neuron combines every value from the previous layer as input.

Note: Our input vector, $x$, can also be referred to as the activations of the $0^{th}$ layer.

More generally, we can calculate the activation of neuron $i$ in layer $l$.

Similarly, we can calculate all of the activations for a given layer $l$ by using our weight matrix ${W^{\left[ l \right]}}$.

In a network, we take the output from one layer and feed it in as the input to our next layer. We can stack as many layers as we want on top of each other. The field of deep learning studies neural network architectures with many hidden layers.

The activations of a given layer will be a matrix of shape $\left( {{n^{\left[ l \right]}},m} \right)$ where $m$ represents the number of observations being fed through the network. Recall the earlier section where I demonstrated calculating the neural network output of multiple observations using an efficient matrix representation.

When I was first learning about neural networks, the trickiest part for me was figuring out what my matrix dimensions needed to be and how to manipulate them to get them into the proper form. I'd recommend doing a couple practice problems to get more comfortable before we continue to talk about training a neural network in my next post.

Feeling like you've got a grasp? Check out this neural network cheat sheet of common architectures.

Sometimes when we're performing clustering on a dataset, there exist points which don't belong strongly to any given cluster. If we were to use something like k-means clustering [https://www.jeremyjordan.me/grouping-data-points-with-k-means-clustering/], we're forced to make a decision as to which group an

Today we'll be talking about support vector machines (SVM); this classifier works well in complicated feature domains, albeit requiring clear separation between classes. SVMs don't work well with noisy data, and the algorithm scales roughly cubic $O(n^3)$ to input depending on your